All Collections
Air quality information
In Vietnam, where does AirVisual get its data from?

In Vietnam, where does AirVisual get its data from?

A
Written by AirVisual
Updated over a week ago

In Vietnam and across the world, AirVisual reports air quality data from three sources:

1. Government air monitoring stations that report data publicly in real-time, generally on an hourly basis. Also known as “reference monitors”, these are typically very expensive to deploy and maintain. These are highly accurate when maintained well. However, due to their high cost (tens of thousands of US dollars), there are usually only a few deployed in a city.

2. Non-governmental air monitoring stations. These are air quality monitors that, because of advances in technology, allow for air quality to be measured with a relatively high rate of accuracy at a much cheaper cost, for example, less than $300. Their low cost enables these monitoring stations to be set up and operated by a range of organizations and private individuals, and larger networks of monitors may be quickly deployed.

3. Modelized data, which is provided in areas which lack ground-based monitoring stations. This is based on a combination of nearby ground station data where available, and multiple sources of satellite imagery.

In Hanoi and Ho Chi Minh City, for example, we report from both government and non-governmental ground-based stations.

In Hanoi, the data sources include the U.S. Embassy in Hanoi, the local government’s Hanoi Environmental Monitoring Portal, as well as non-governmental organizations and private individuals.

In Ho Chi Minh City, because there is a lack of local government data, most of our data is reported from sensors set up by private contributors including schools, as well as the US Consulate in Ho Chi Minh City.

All private contributors have chosen to become AirVisual community members: individuals and organizations who share their outdoor monitoring data to raise awareness of air quality issues. They operate validated outdoor AirVisual air quality monitors, which go through several location and calibration checks before they start reporting on the AirVisual platform.

Ground-based air quality monitoring stations give the most accurate and timely air quality data, which best reflects actual conditions at the level where people are breathing. However, in areas which do not have any ground-level stations available, AirVisual can use satellite imagery and weather patterns to model air quality. We have done this, for example, in Cho Dok and Long Xuyen in An Giang province. Wherever data is estimated based on this modelization, this is clearly indicated with an asterisk (*) by the AQI number: 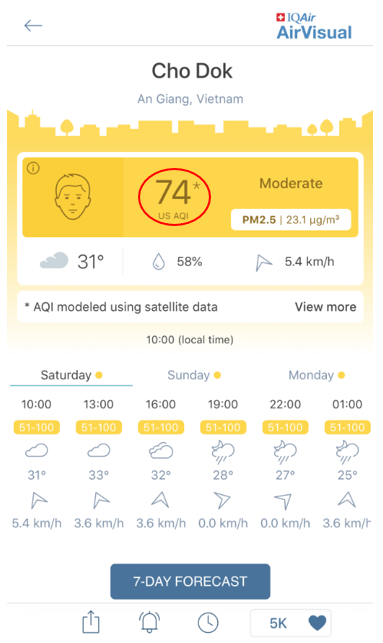 AirVisual is the most trusted air quality platform because it’s fully transparent. AirVisual always displays the sources of its air quality data and gives its users a choice as to which data they want to follow. Discover where to find data source information.

Did this answer your question?